POV: Street Photography | Should It Be Furtive?


This POV is prompted by a number of recent posts expressing soul-searching angst from various quarters, as well as various photographers expressing some discomfort in utilizing 'guerrilla' (their term...not mine) tactics to get candid photographs of the street.

It seems that a hands-on review of the Fuji X-T1 by the photographer Zack Arias in Marrakech included some of his tips and tricks in capturing unguarded moments of street life, and a number of photographers questioned the ethics of furtive street photography.

When I'm pounding the New York City pavements with a M9 or a X Pro-1, I shoot from the hip about 90% of the time. This technique -if you can call it that- ensures that the people I photograph are totally unaware that I am making a photograph of them...and frequently, unaware that I'm even there.

Street photography is -to my mind- synonymous with candid photography. The latter "...is achieved by avoiding prior preparation of the subject and by either surprising the subject or by not distracting the subject during the process of taking photos". (Source: Candid Photography:Wikipedia).

We all know the father of candid photography was the iconic Henri Cartier-Bresson, whose book Images à la Sauvette was published in 1952, was the master of candid photography. Setting aside that his photographs were mostly of unguarded moments, the very title of his book is French for 'furtively'...and not The Decisive Moment as his publisher translated it.

When I photograph in religious spaces such as Sufi dargahs or Hindu temples in India...or wherever I am mingling with people going about their daily life, I much prefer photographing furtively and shooting from the hip. This is to capture candid expressions, unposed body language and unplanned layers.

It's impossible for me to avoid attention wherever I travel. A foreigner with a camera is always a focus of attention, and I have to use all sorts of stratagems and 'techniques' to grab frames as I can...ranging from the "I'm a lost tourist in NYC...and I'm looking for street names/landmarks/addresses" while shooting my iPhone...to the gazing in another direction or pretending to be talking on my iPhone whilst shooting my rangefinder from the hip...yes, there are myriads of ways to play the dumb tourist, sightseer or a disinterested photographer. 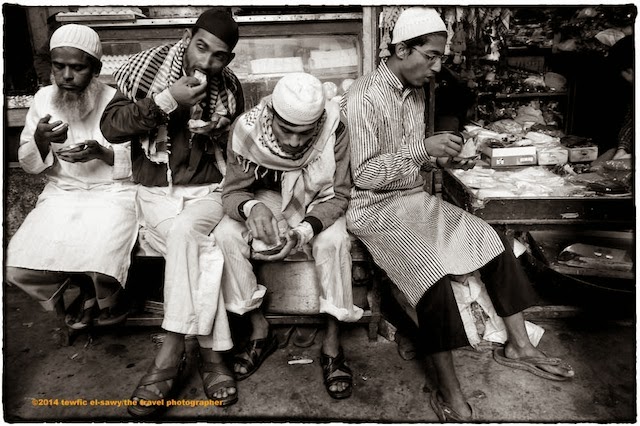 The iPhone image of the two musicians going for a hug was made by (1) anticipating what they were about to do, and (2) holding the device in my hand as if I was looking at a map. The other image of the Indian men having a snack near the shrine of Nizzam Uddin was made by shooting my X Pro-1 from the hip whilst pretending to be talking on the iPhone. Had I planted myself in front of them with a camera to my eye, they would've stopped eating and awkwardly froze to pose for the picture.

Remember, I'm not photographing to capture people in awkward or embarrassing moments...that's not my interest. My interest is capturing scenes where people are at their most unguarded, at their most normal and candid moments. If one of my frames accidentally depicts someone picking his/her nose...or a man scratching his crotch, the frame gets deleted.

To those who take that as being furtive, sneaky or sly...I say to each his own.