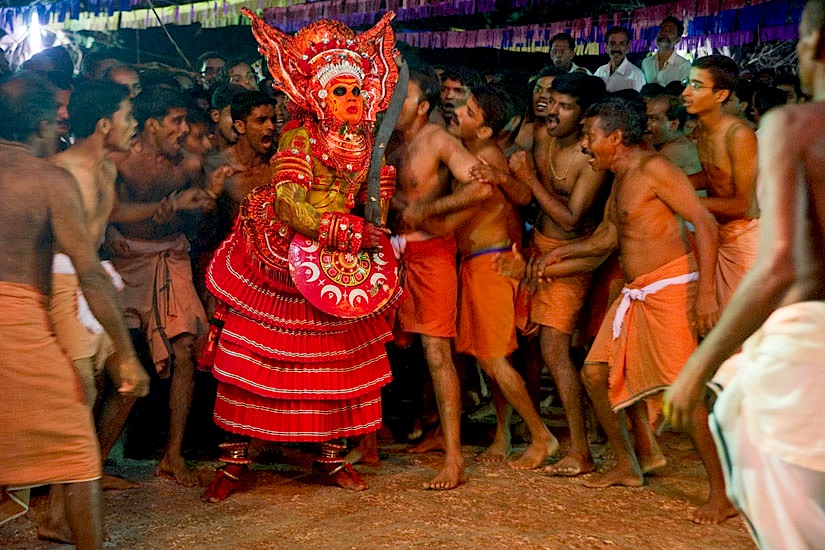 Photo © Theodore Kaye-All Rights Reserved
Theodore Kaye grew up in China, India and Indonesia. While majoring in Film, he studied also Uzbek and Farsi and worked as a newspaper editor and mountain guide in Central Asia.

Subsequently he was a staff photographer at Rhythms Monthly, a Chinese-language geographic magazine, and covered stories in India, Sri Lanka, Tajikistan, Taiwan, Japan, Ireland and Great Britain. His work has been featured by the New York Times, the International Herald Tribune, the Asahi Shimbun and the National Film Board of Canada.

I was particularly attracted to his Theyyam Dancers of North Kerala for the vibrancy of his photographs. Interestingly, it seems that Theodore was guided to these performances by a contact who lives in Dubai, and organized his Keralite relatives and neighbors to provide him with all the support he needed to document these dances.

Theyyam is a unique ritual which is performed only in Northern Kerala. After a complex preparatory ritual involving elaborate make-up and meditation, the performers are incarnated as deities, and dispense advice and counseling to the throngs of devotees who attend these rituals. It's a living cult of several thousand-year-old traditions, rituals and customs, and is observed by all the castes and classes in this region.

My own gallery of Theyyam Incarnate Deities is here.
at October 18, 2010