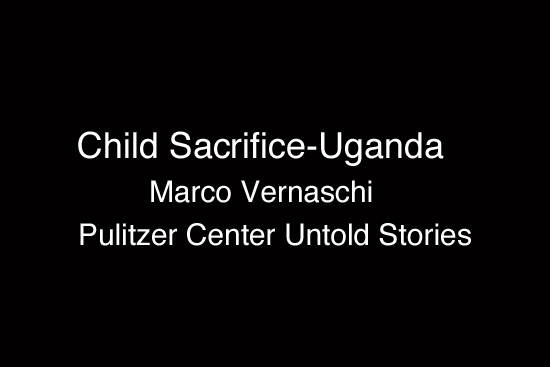 "Yet we also believe, and Vernaschi agrees, that it was wrong to ask that the body be exhumed. It showed disrespect for the dead, and forced a grieving family to suffer anew. It also had the effect of focusing attention on the actions of one journalist, as opposed to a horrific crime that needs to be exposed.

We regret any damage that may have been caused. We intend to continue this project, documenting the phenomenon of child sacrifice, but in so doing we we will redouble our efforts to authenticate every claim and to insure the privacy rights of individual victims."

Here's another story that is guaranteed to make your stomachs churn. It involves Marco Vernaschi an Italian photographer/photojournalist who worked on a project documenting the phenomenon of child witches, human sacrifice and organ trafficking in Africa, and the Pultizer Center For Crisis Reporting.

I have linked to various photographs, but be aware that these are highly disturbing.

It appears that the Pulitzer Center funded Vernaschi to do a story on child sacrifice in Uganda, and it published some of his hard-hitting photographs in an article titled Uganda: Babirye, The Girl from Katugwe, in which the photographer convinces a Ugandan mother to allow the exhumation of her mutilated daughter's body in order to photograph it as "visual evidence". The photograph of the corpse is then shown on both Vernaschi's website and on the Pulitzer Center's. Payment (described as "a contribution for a lawyer") was made by the photographer to the mother.

Another photograph on Vernaschi's website shows an abused boy with a catheter protruding from where his penis has been cut off. His face is clearly shown.

"Child sacrifice in Uganda is a phenomenon that has embedded itself within traditional customs but that bears no genuine relationship to local culture. The appeal to "cultural beliefs" is actually an excuse used by witchdoctors to justify their crimes, and by the Ugandan government to avoid taking action. The government tries to minimize the magnitude of the problem because politicians fear losing votes and this is a a country where witchdoctors wield surprising influence at the polls."

I'm all for documentary coverage to expose and stop this barbaric practice...there's no argument there. However, for a photojournalist to ask (and then pay) for the exhumation of a body beggars belief. Had the child died in a ritualistic murder in Italy, could Vernaschi been able to ask its family to exhume the body for a few pictures? Had he been able to photograph an Italian baby boy with a catheter sticking out of his groin? Why can't these photojournalists and publishers understand that they cannot continue to show pictures of mutilated children??

It's immoral. It's as simple and as complex as that.

As I wrote in an older post: To Vernaschi and to the Pulitzer Center's Board of Directors, Advisory Council and Staff: what if Babirye and the baby boy were your children, your niece and nephew or even just a relative...or an acquaintance? Would you still have photographed and published the photographs...or is it because they're "just" Africans?

Vernaschi is an award winning photographer....and well-experienced dealing with gruesome topics. Surely he could have photographed the story differently? Or is it about winning awards and applause from the rest of the lemmings?

Update: For a more detailed and comprehensive opinion, along with some responses from the Pulitzer Center, check A Developing Story.
at April 21, 2010