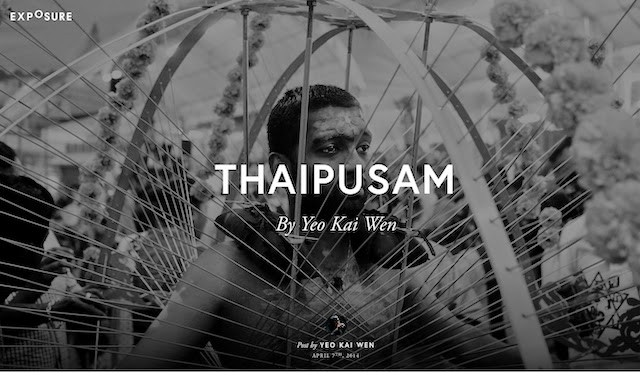 Here's an interesting and compelling photo essay on Thaipusam, the Hindu festival celebrated mostly by the Tamil community during January or February. It's mainly observed in countries where there is a significant presence of Tamil community such as India, Sri Lanka, Malaysia, Mauritius Singapore, Indonesia, Thailand and Myanmar.

This particular series of monochrome photographs were made during Thaipusam at Sri Thendayuthapani Temple in Singapore, by Yeo Kai Wen and was featured by Exposure.

It's unusual to see Thaipusam photographs in black and white as it's a colorful festival, with devotees shaving their heads and undertaking a pilgrimage along a set route while carrying out various acts of devotion, which may include self-mortification by piercing the skin, tongue or cheeks with skewers.

The photographer, Yeo Kai Wen graduated from the School of Film and Media Studies with a Diploma in Mass Communications in 2009, and is now specializing in documentary production, print and photojournalism.

Exposure is a storytelling platform specifically created for photo sets which are described as 'narratives'. It appears to have an extremely simple and easy to use editor that lets you drag and drop photos into your browser, and then add headers, body text and captions between photos. The posts feature full-bleed images and imaginative fonts and white space. Three Exposure posts are free, but for unlimited posting, custom domains, password-protected posts, and more, one has to shell out either $5 or $10/month, depending on the package chosen.
Posted by tewfic el-sawy at 11:17