"It made me think we are destroying our planet to accumulate things for nothing. To survive and survive well, we don't need all this." -Sebastião Salgado

As I promised myself, I spent an enjoyable hour viewing the 250 magnificent photographs of Sebastião Salgado at the epic exhibition titled Genesis. It was crowded, but not uncomfortably so. The regular entrance price was the equivalent of $15...possibly a pittance what other museums will surely charge (especially those in New York City).

The Natural History Museum has a winner in hosting the global premiere of this incredible photographic project by Sebastião Salgado. It took eight years to complete, and shows us the flora, fauna and indigenous tribes that haven't been touched by modernity.

I'd say there's an equal number of monochromatic photographs of flora/fauna and indigenous tribes, and I naturally and instinctively gravitated towards the latter. There was large sized photographs of scarified Omo Valley tribeswomen (simple, with no demeaning floral arrangements on their heads as I've seen in other photographic work),  of Nambibian Himba people, of Amazonian tribes and of Upper Xingu people...of Papua New Guinea tribesmen and shamans, the Dinka of South Sudan, and so forth.

Under a plexiglass case, there's an enormous book of the Genesis photographs published by TASCHEN. There are two options: the first option is a limited edition (not more than 5 editions will be published) at $10,000 per book...the second option is another edition limited to 2500 at $4,000 per book. If Mr Salgado sells them all, the $ amount is over $10,000,000.

Another much more affordable version is the one below that retails in the museum shop for approximately $67. 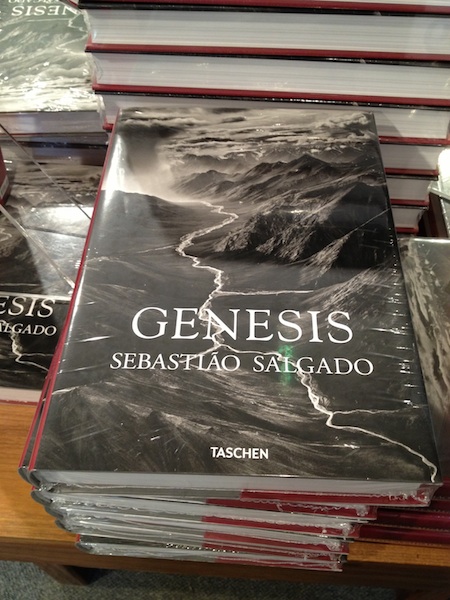