An Essay On Photojournalists' Scarves....Or Not 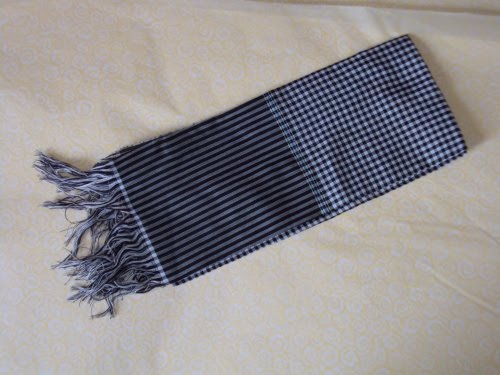 This essay on scarves was written and sent to me by a photographer-photojournalist who wants to remain anonymous. Complaints, thoughts and remarks can be sent to him/her. I've edited, reworded and excised parts to keep it shorter.

"The first reason for photojournalists wearing scarves is that these instantly and with certainty identifies you as a PHOTOJOURNALIST, and removes you from the pool of suckers known simply as "photographers", especially "art" photographers.

The second reason photojournalists love scarves (especially those of ethnic origin) is that it tells non-photojournalists know that we are exotic, and that we do exotic, non 9 to 5, non traditional type things.

The third reason is that wearing the ethnic scarf will make other people instantly assume the photojournalist has a deep connection with, has spent time living with, has created a powerful but yet unseen photographic essay about, the ethnic group that wears that particular scarf.

The most popular, but lacking in credibility is the Keffiyeh. It has become stylish, fashionable, and carries with it a strong hint of activism. It's out of favor except for newbies. It's one thing to wear it around the neck...which is barely passable, and quite another having your picture wearing it as a turban (think Yasir Arafat) on your website bio or Facebook page...this signals the world you're a miserable ass...and that you're prematurely bald.

The second type of scarf is the Cambodian Krama. This particular scarf shows you have worked in the conflict ridden regions of Cambodia (also known as Angkor Wat), and most probably Thailand's southern beach wars as well, and that you suffered from malaria and bouts of sunburn, and dangerous girls on the battlefields of Koh Samui.

The third is the African scarf- the Tagelmust. Worn by Tuareg nomads in the Sahara, these scarves are worn by the old school of photojournalists- those who have covered the north African conflicts, tragedies like Darfur, the Western Sahara, the Polisario, Algeria, even Southern Sudan! This is the Ferrari of scarves."

By the way, if you haven't seen and bookmarked Shit Photojournalists Like, you ought to. I don't think it has mentioned scarves, yet...but it will have to sooner or later. You'll see.
Posted by tewfic el-sawy at 08:47