POV: So Whose Lapse In Judgment Is It? 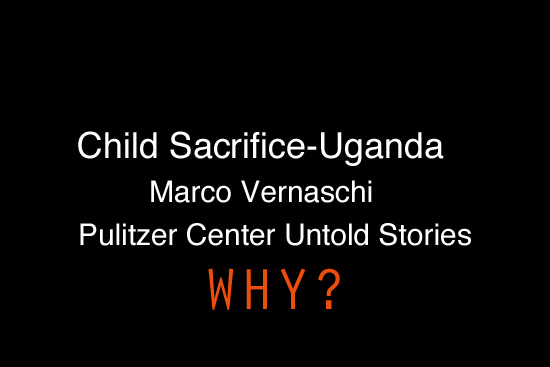 Update evening of 4.25.2010: Both Marco Vernaschi and the Pulitzer Center For Crisis Reporting responded to the critics.

I was pleased to read this final paragraph of the response (my emphasis):

We do not suggest that the decisions involved in this reporting project are anything but difficult, as we hope was apparent in our statement accepting responsibility for what we believe was a mistaken decision to exhume the body of Babirye and to publish the image on our site. It is our hope that these issues can be discussed without malice, distortions and groundless attacks on the personal motivations of others.-- Jon Sawyer, Pulitzer Center Executive Director

Along with many others, I wrote a post a few days ago on a story being discussed in photojournalism circles and blogs, involving Marco Vernaschi, an Italian photographer/photojournalist who worked on a project documenting the phenomenon of child witches, human sacrifice and organ trafficking in Africa, and the Pultizer Center For Crisis Reporting. The story as it evolved during the past week hinged on the veracity of Vernaschi as to the circumstances behind the exhumation of a Ugandan girl, and the Pultizer Center's publication of the photograph(s) and its subsequent apologies for doing so.

I am listing the links to these blogs/websites all through this post.

"Why did Marco Vernaschi do it?"

An important and pertinent question, but mine is different. I don't really care why Vernaschi did it. Perhaps he rationalized that exhuming a child's corpse and photographing it was the right thing to do...that it would bring this issue to the West's "consciousness" (as if we really would and could do something about it)...that it would win him more photojournalism awards...that it would make him the best photojournalist in the world...that it would justify his grant from the Pulitzer Center...that it would put bread on his table or pay his mortgage or pay his children's school fees...whatever. I believe he was wrong, and that's the end of it.

I ask the same question but of The Pulitzer Center For Crisis Reporting's Executive Director and his staff . It was The Pulitzer Center which published Vernaschi's photographs and his essays. So here's the real nub of the matter: why did they do it and why didn't they check the details' veracity before publishing? Had they done what in banking circles is called "due diligence", they may have realized what the incomparable Benjamin Chesterton of A Developing Story did. Had they investigated the story a little more seriously, they may have realized what the courageous Anne Holmes of The Vigilante Journalist did.

As I expressed in my POV: And The Outrage Continues involving the publication of a photo essay on a young girl in Kurdistan being circumcised, photographers and photojournalists operate under intense competition and pressure to submit cutting-edge work, and frequently lose sight of what is right. Exhuming the body of a young girl for a photograph is beyond the pale, but the decision for its publication wasn't Vernaschi's...it's the Pulitzer Center's. I'm not at all exonerating the photographer for what he did, but I'm more critical of those who agreed to publish these photographs.


Let's get real. If most publishers (especially those of Pulitzer's repute) refused to publish photographic tripe of dubious ethical provenance, photographers would toe the line....but because sensationalism has pervaded our media, they cut corners and lose sight of what is right..especially when it involves poverty-stricken Africans or Arabs, who have no or little legal recourse to protect their privacy rights.

Let's all remember how aghast we were when photographer Adnan Hajj was accused to have digitally manipulated photographs (ie cloning thicker plumes of smoke from IDF missiles already raining on Beirut), and we kept tut-tutting about it until Reuters fired Hajj and a photo editor, and subsequently issued new policy guidelines for its photographers. Adding some smoke plumes or exhuming a body for a photograph...which is worse?

Yes, the Pulitzer Center apologized, and promised to "redouble (its) efforts to authenticate every claim and to insure the privacy rights of individual victims."

Is that enough? I don't believe so.

To stage or not to stage? by Jørn Stjerneklar.