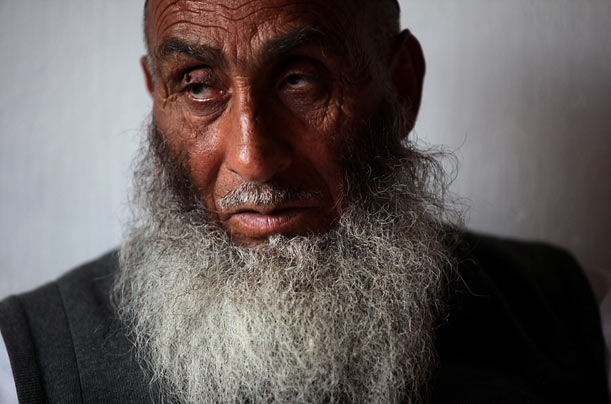 Photo © Paula Bronstein/Courtesy TIME-All Rights Reserved
TIME magazine recently featured a series of portraits of released Gitmo detainees by Paula Bronstein. The stories of how these men were captured and eventually detained in Guantanamo are chilling, and underscore how impervious the American government and military were to the articles of Geneva Convention and international law, including habeas corpus.

The portrait above is of Haji Nasrat, an Afghan farmer who at 77 was Guantanamo's oldest prisoner. Partially paralyzed for more than 15 years and illiterate, Nasrat says he does not know why the Americans detained him. Let's ponder on the reaction in Nasrat's village when he returned; jubilation at first and then rage at his being unjustly detained....a rage felt for a variety of reasons by thousands and thousands of Afghanis...Pashtuns and Hazaras.

Coincidentally, I read in The New York Times that a new Army handbook was published to guide our military on building relationships with Afghan village elders, and how to build trust among village residents. Shouldn't that have been done 8 years ago?

Another question: Am I the only one who thinks that TIME magazine's photographic galleries are in dire need of a facelift?
at August 13, 2009