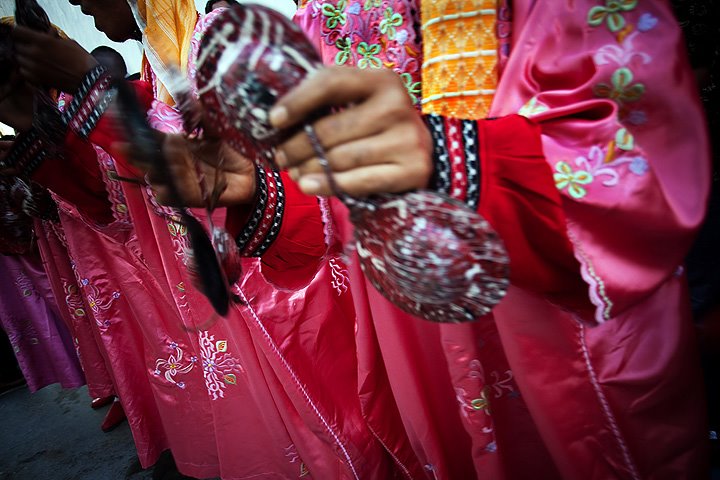 Photo © Tewfic El-Sawy -All Rights Reserved
To end the recent string of post-expedition navel-gazings, here's what I think worked and didn't in terms of gear during the Gnawa Festival photo-expedition. As readers of this blog know, I opted for a minimalist equipment load, and stuffed my Domke F-3X with the following:

I used my 5D Mark II fitted with the Canon 28-70mm f2.8 about 70% of the time, the 70-200 f2.8 about 20% of the time and the 17-40mm f4.0 the balance. The 24mm f1.4 never left the bag this time. Wherever I went, I felt I needed the flexibility of zooms, and a prime wouldn't be useful in the situations where I photographed. I experienced initial difficulty in focusing on moving subjects, and blamed my 70-200 lens until I realized that I hadn't turned on my camera's AI Servo AF mode!

I have to say that my beloved 70-200 f2.8 is on its last legs. I guess it dropped too many times in Orissa, on Angkor Wat's stone slabs, in Bali's rice paddies and elsewhere. It now wobbles and rattles and, while it still works, it also earned a well deserved retirement...maybe as door stop.

My experience with the G10 was an unhappy one, and I left it aside after a few tries. I had high hopes that it would be a perfect street camera for the alleys of the medinas, but it frustrated me and I gave up after a while. Larry Larsen, a member of the photo-expedition, used his as a point & shoot and seemed reasonably content with its images. Perhaps he managed his expectations better than I did. I have no doubt that in the right hands and used in the appropriate conditions, it's a fine little point & shoot. However, in my case I expected something more...but I didn't have the time nor patience to work at it.

I thought the PMD 620 recorder performed quite well in the rather extreme situations I put it through. Since most of the Gnawa performances were held in small zaouias, the din of the iron querqab (castanets) used by the Gnawa caused significant distortion in the recordings. Moving around to better positions was impractical, so I had to choose a spot where to stand or sit, record and photograph...not exactly an easy thing to do. I tried using Audacity's filters, but the distortion on some of the sound tracks is still too harsh. As one expert told me when I complained, distortion happens and we have to live with it (or not) sometimes.

Both the Acer and the G-Tech Mini G-Drive performed flawlessly. No complaints there.
Posted by tewfic el-sawy at 06:53