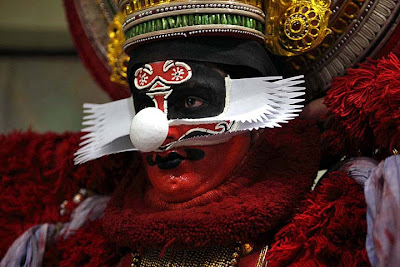 It was photographed at the reputed Kathakali Kalatharangini school in Thrissur, during he Theyyams of Malabar 2009 Photo~Expedition.

The make up used in Kathakali performances is made from various mineral ores and pigments, which are ground on a stone and mixed with coconut oil before being applied on the actors' faces. Interestingly, the character shown in the above photograph placed a "chundanga" seed under his lower eyelids to turn the white of his eyes red.
at June 12, 2009