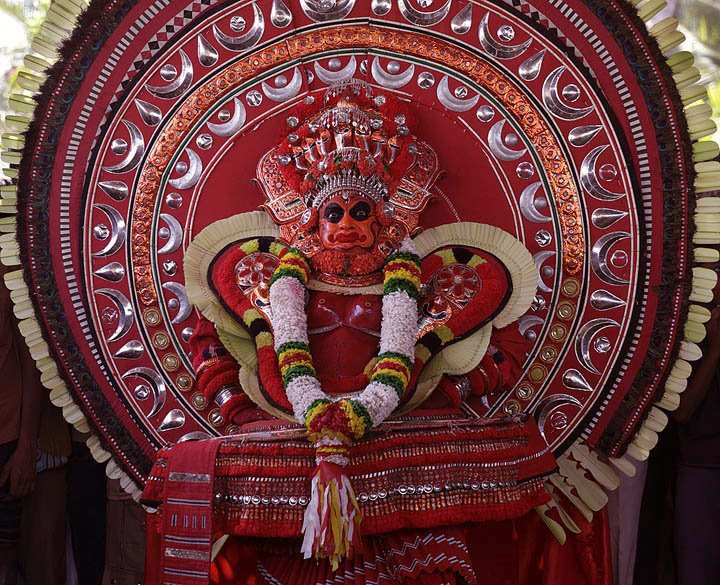 Photo ©Tewfic El-Sawy-All Rights Reserved.
As the regulars readers of this blog know, the Theyyams of Malabar Photo Expedition was a resounding success in terms of both imagery and logistics, but who (or what) are really the Theyyams?

The term Theyyam is the corruption of the Malayalam word Daivam or deity. It may also be derived from the Sanskrit word for deity which is "deva". It's an indigenous religious dance practiced only in North Kerala, and a cult predominant amongst rural areas, consisting of several thousand-year-old traditions, rituals and customs. It involves virtually all castes and classes of the Hindu religion in the area, and its adherents consider the Theyyams as incarnations of various deities, and seek their blessings and counsel.

There are nearly 400 Theyyams representing various local deities, as well as legendary and mythological characters. For instance, one of the Theyyam is named Moovalamkuzhi Chamundi, another is Puliyoor Kali and Padinhave Chamundi. I was also told by Vinay, our fixer, that only members of a specific sub caste can become Theyyams, and this privilege is passed on from generation to generation.

A fundamental component of the Theyyam performances is the make-up which involves intricate face-painting and various body decorations. During one of the rituals, we witnessed a Theyyam whose body was covered with cotton-like tufts to symbolize a tiger. Different costumes like an armor, complex headdress and other body decorations are prepared by artists members of the same caste. Some of the costumes are made of of coconut leaves, while headdresses and masks are made of more solid materials, while bracelets and anklets are heirlooms, passed on from father to son. Male and female deities are represented by Theyyam performers, and it's rather easy to differentiate between the two, since the performers incarnated as goddesses wear bras made out of two halves of a dried-out coconut shell! 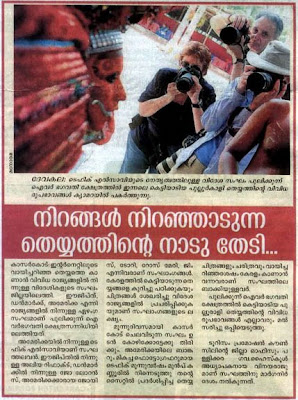 Article appearing in the Manorama newspaper
(the widest circulated newspaper in the world!)
of February 25 on our photo-expedition.

The Theyyam prepares his performance by meditating while being made up, and enters in a sort of a trance, whereupon he walks (aided by assistants) over to the temple's shrine and gradually morphs into the shrine's deity. The Theyyam follows the accompanying cacophonous music and its furious drum beats by going further and further into a trance. At the appropriate time, the Theyyam is seated on a stool and devotees approach him with donations and solicit its advice, which he provides in a raucous voice. I was also told that the Theyyams' advice is provided in a mixture of Sanskrit, Old Malayalam and Tamil. I also found it interesting that both Theyyams and Kathakali performers use similar eye movements to convey emotions.

There's no question that the stage-practice of Theyyams and its intriguing rituals make it one of the most fascinating religious performances of India...and is the reason for it to have been the underpinning of my photo expedition in Kerala.

Documenting such unusual indigenous rituals and festivals by combining photojournalism and travel photography techniques is what makes my photo expeditions-workshops different than the rest...and what makes me enjoy them. Setting up photo tours based on itineraries copied from travel brochures is not what I believe photo expeditions should be.