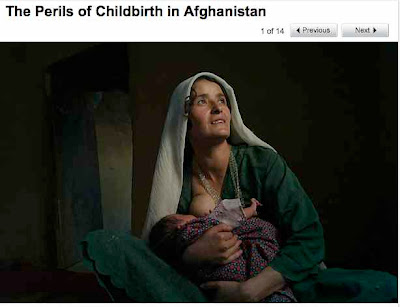 Photograph © Alixandra Fazzina/TIME
TIME magazine features a 14-picture essay on the perils of childbearing in Afghanistan. Photographer Alixandra Fazzina traveled to Badakhshan, where a harsh landscape and lack of infrastructure have given rise to an astonishingly high rate of deaths during childbirth. In this far flung area of Afghanistan, for every 100,000 babies born, 6,500 women will die.

I’m sure I won’t be the only one who thinks the above photograph is reminiscent -to use a cliche- of La Pieta, and there are many more in this essay that will move you.

Alixandra Fazzina has spent a decade chronicling war, violence, misery and distress, mainly in Africa and the Middle East. She photographed the notorious Lord’s Resistance Army and their victims in Uganda, the Miya-Miya rebels in Congo, and is currently working on a story about people-smuggling from Ethiopia and Somalia to the Yemen and Saudi Arabia. In addition to her work for British newspapers such as The Sunday Times, Guardian, Telegraph and Independent, her reportage features were published in Newsweek, The New York Times, Stern and Corriere.

TIME magazine's The Perils of Childbirth in Afghanistan
Posted by tewfic el-sawy at 10:43