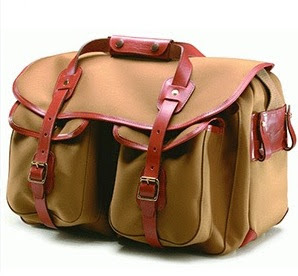 WIRED has a recent post on what it describes as three of the best camera bags you can buy. One of these is the Billingham 550. As most of us know, finding the 'perfect' camera bag is tantamount to finding the holy grail...and may be even harder.

I have owned the Billingham 550 for a few years now, but used it infrequently. It's a British classic, sturdily built based on a fishing bag design and, similar to the famous Barbour rain jackets, gives off an assurance of indestructibility. The downsides to these attributes are that it's heavy, the leather straps are hard to handle and it's fiddly to open.

I have no doubts that the Billingham would be a delight to use after a decade (or more) of steady rough usage, when the canvas gets softer, the straps more malleable and easier to fit in the brass buckles. Frankly-speaking, when the bag is new, it's a pain. It used to be that English aristocrats gave their new shoes to their butlers to break them in...I wonder if that concept would work with the Billingham bags?

Naturally, with the current weak dollar, these bags (which are manufactured in the West Midlands) are singularly expensive....but they'll last forever. Just be prepared to have to break them in for a long time.

I used a Lowepro Stealth Reporter AW until I noticed I was starting to walk crab-like because of its weight on one shoulder. I then switched to a Lowepro CompuTrekker AW backpack until I noticed I was walking hunched like Quasimodo, so I switched to a roller bag made by Wenger. So far so good. My still new Billingham 550 is in my closet.
Posted by tewfic el-sawy at 18:09