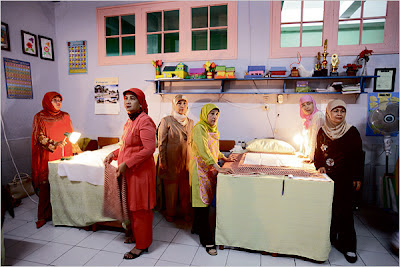 I was initially glad to finally see a serious topic addressed by the Magazine in a photo-essay format. After all, it's about the cruel, abhorrent and abominable tradition practiced in some Islamic countries on the pretext that it's condoned by Islam. However, the tradition of female circumcision does not originate from Islam nor from the Qur'an, nor is it condoned by either. For more on this, here's a link from the BBC. The tradition has been banned by many Islamic and African countries, and the internet is replete with articles from reputable news organizations confirming this.

However, after reading the accompanying article and looking at the photographs, I regret to describe the photo essay as 'lazy'. I'm not claiming that the photojournalist was lazy; just that what was published as the photo essay was lazy. Stephanie Sinclair's work credentials are impeccable, and her humanitarian efforts are praiseworthy. She founded Operation Azra, a charity aimed at helping a Pakistani woman who burnt by acid thrown by a male relative. So I have no questions as to her professionalism and compassion.

On the other hand, I found the article as authored by Sara Corbett to be fair and even-handed , although I was surprised that it quoted a dubious statistic. I'm not an statistician, but its parameters are risible.

So here's a photo essay limited to these 8 narrowly focused photographs...was is the editors' decision to cull them down to these 8 based on layout design, space, or was it just lazy editing, or for their shock value....? I can't answer that. All I know is that I expected better from the photo editors of the Sunday Times Magazine, especially on an issue such as this one.

The article ends with this: "Nonetheless, as Western awareness of female genital cutting has grown, anthropologists, policy makers and health officials have warned against blindly judging those who practice it, saying that progress is best made by working with local leaders and opinion-makers to gradually shift the public discussion of female circumcision from what it’s believed to bestow upon a girl toward what it takes away."

The photo-essay: Inside A Female Circumcision Ceremony