Marcus Bleasdale: Rape of A Nation 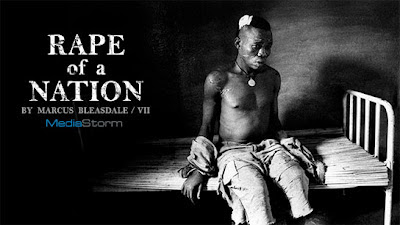 Image © Marcus Bleasdale-All Rights Reserved
MediaStorm brings us Rape of A Nation, a gut-wrenching multimedia feature of Marcus Bleasdale's work in the Democratic Republic of Congo, where an estimated 5.4 million people have died since 1998, the largest death toll since the Second World War, according to the International Rescue Committee (IRC). It also reports that as many as 45,000 people die each month in the Congo. most of which are caused by malaria, diarrhea, pneumonia, malnutrition, and neonatal problems; results of a devastated economy.

The feature is by Marcus Bleasdale, a photojournalist (now with VII) who spent eight years covering the brutal conflict within the borders of the Democratic Republic of Congo. Widely published in the UK, Europe and the USA in publications such as The Sunday Times Magazine, The Telegraph Magazine, Geo Magazine, The New Yorker, TIME and Newsweek and National Geographic Magazine, Marcus has received acclaim for his work over the years, including several prizes and awards.

This is a top-notch production merging all visual elements of multimedia: quality photography, heart-thumping video and a strong narration. The transitions from still photography to video are very well done...and although I'm not a fan of mixing B&W with color photography, I didn't mind it much in this feature.
at January 23, 2008