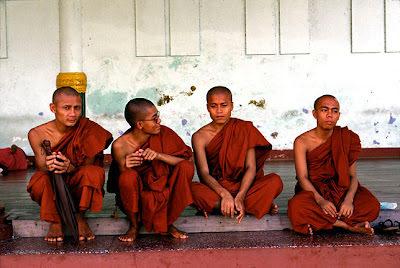 Image Copyright © Tewfic El-Sawy-All Rights Reserved
I follow international -political and financial- news very closely for a number of reasons, and the current events in Myanmar are disturbing. I've traveled to Myanmar a number of times, and I consider it to be one of the most photogenic countries in South East Asia...and its people are warm, friendly, and attractive. In a way like Cuba, its political isolation enhances its attraction to travel photographers, but change might be in the air.

The international media is reporting that Buddhist monks staging anti-government protests in Myanmar pushed past closed gates to occupy the Sule pagoda temple in downtown Yangon, and took it over after finding the gates locked at the Shwedagon pagoda, Myanmar's most revered temple, which sits atop a hill dominating Yangon. These actions reflect long pent-up opposition to the repressive military regime.

In the central city of Mandalay, more than 1,000 monks marched, while about 100 others in dark saffron robes staged a peaceful march in the western Yangon suburb of Ahlone. More than 100 Buddhist monks from some monasteries in South Okkalapa township in Yangon's northern suburbs also marched in protest, returning to monasteries without incident.

The interesting aspect of these developments is that monks in Myanmar have historically been at the forefront of protests, but the authorities know that restraining monks poses a dilemma. Monks are highly respected in Buddhist Myanmar, and abusing them in any way could cause public outrage. The Alliance of All Burmese Buddhist Monks has asked its followers across the country to refuse alms and offerings from anyone connected to the military. This is deeply humiliating for the military regime and its supporters, since such an action by the monks will be taken extremely seriously in this Buddhist country. Without such rites, a Buddhist loses all chance of attaining nirvana, or release from the cycle of rebirth.

In my view, something's about to happen in Myanmar...I suspect there'll be increased repression and continued civil unrest in the months to come.
Posted by tewfic el-sawy at 08:21