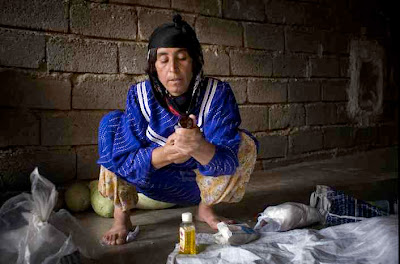 The first reason is obvious; female genital cutting (FGC) is an abhorrent and an utterly repellent practice. The graphic photographs show us how Sheelan, a seven-year-old girl is taken by her mother to be circumcised in Kurdish Iraq, where more than 60 percent of women have undergone the traditional and controversial procedure. It is much beyond controversial...it's a horrible tradition and no efforts should be spared in trying to eradicate it. It's perhaps through photo essays like these that such efforts will increase, and young girls will be spared the indignity and pain of this procedure.

On the other hand, I'm shocked that The Washington Post editors decided not to preserve Sheelan's privacy and dignity. Here's a 7 year old whose mutilation, a terribly humiliating and painful experience, is now seen on the internet. Would the editors be so cavalier in invading the privacy of a 7 year old in New York City for instance?...or is it because Sheelan and her mother are impoverished Kurds that they ignored their basic rights??

And let me take this thought a little further...has Sheelan's mother given her consent after being explained exactly where these pictures would eventually appear? Was she given money? What did the photographer tell her to convince her? People in the Middle East have human emotions just like us...they want (and have the right) to be treated with respect and dignity like everybody else. Unfortunately, since there are no accompanying explanatory article in the newspaper's website, we are left to speculate.

I'm all for publicizing the atrocity of female genital mutilation in order to combat it, but certainly not at the expense of anyone's privacy as this photo essay does. There are ways to photograph (or edit) this event and not identify the girls' (yes, there are others!) faces.

So shame on The Washington Post's photo editors. Would they be so outrageously cavalier had Sheelan been their daughter?

For those of you who don't know: There is nothing in the Qur'an that mandates female genital cutting, and it is not practiced by the majority of Muslims. So when Sheelan's mother is reported to say: "This is the practice of the Kurdish people for as long as anyone can remember. We don't know why we do it, but we will never stop because Islam and our elders require it", she's wrong. Her tribal elders may think so, but it still doesn't make it right.

In fact, the Grand Mufti Ali Jumaa of Egypt, signed a resolution denouncing and totally banning the practice, as it goes against the principles and teachings of Islam.

The Washington Post's Female Circumcision in Kurdistan with graphic photos by Andrea Bruce.
at December 30, 2008