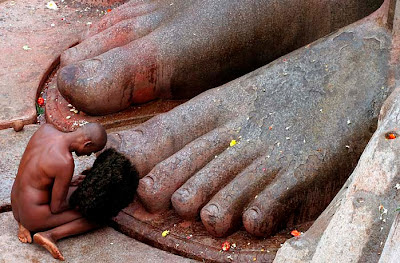 Image Copyright © Chris Ramirez -All Rights Reserved
Michael Robinson Chavez is a staff photographer at the the Los Angeles Times after many years at the Washington Post and Boston Globe. In addition to domestic stories, he covered wide-ranging international assignments in over 45 countries. He was twice named Photographer of the Year (in 2004 and 2007) by the White House News Photographers' Association, and his work has been exhibited in his native California, the Visa Pour l'Image festival in southern France, Washington DC's Corcoran Gallery, and many other galleries around the world.

I chose Michael's remarkable work on the Jain festival of Mahamasthakabhisheka. This is an important Jain festival held once every 12 years in the town of Shravanabelagola (between Mysore and Bangalore) in Karnataka state, India. The festival is held in veneration of an immense 18 meter high statue of the Bhagwan (or Saint) Gomateshwara Bahubali. The anointing last took place in February 2006 where at least 1.2 million Jains attended, and the next ceremony will occur in 2018. I visited the sacred site, however it wasn't at the time of the festival.

As the Mahamasthakabhisheka begins, consecrated water is sprinkled onto the participants by devotees carrying 1008 specially prepared vessels. The statue is then bathed and anointed with libations such as milk, sugarcane juice, and saffron paste, and sprinkled with powders of sandalwood, turmeric, and vermilion. Offerings are made of petals, gold and silver coins, and precious stones. Most recently, the ceremony's finale has included an enormous shower of flowers from a waiting helicopter.

In my view, the above photograph perfectly illustrates the devotional submission by this Jain pilgrim to the saint. Incidentally, the Jain pilgrim is a Digambar or sky-clad...who wear no clothes following the practice of the Jain saint Mahavira. The Digambar believe that this practice represents a refusal to give in to the body's demands for comfort and private property. Digambara ascetics have only two possessions: a peacock feather broom and a water gourd.